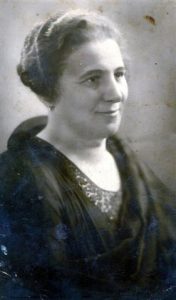 Berta Eisenberg was born on December 5th in 1884 in Galicia. Her 5 siblings, her parents and herself moved to Vienna at the beginning of the 20th century. She married Siegfried Eisenberg there, who was the owner of the S. Eisenberg department store in Salzburg, where they moved to in 1909. Berta and Siegfried had five children, one of them was Paula, born in 1909. Siegfried died in 1924, so Berta had to take care of their children alone. She ran the department store alone, but when antisemitism got stronger in the 1930s, she sold it and moved to Vienna again with two of her children who still lived with their mother, Robert and Paula.

Paula’s daughter Leah was born in 1940. Berta, Paula and Leah were deported to Latvia by the Nazis on December 3, 1941. Leah was just 1 year old at the time. All three of them were killed in the forest of Bikernieki near Riga in March 1942. 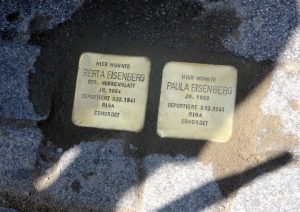 In an Interview via Skype, Berta Eisenberg’s great-granddaughter Tamar Berta Granit, who is living in Israel, gave us invaluable impressions about her family and how they live with what happened. You can hear in the Hörstolperstein, what a great person she is.